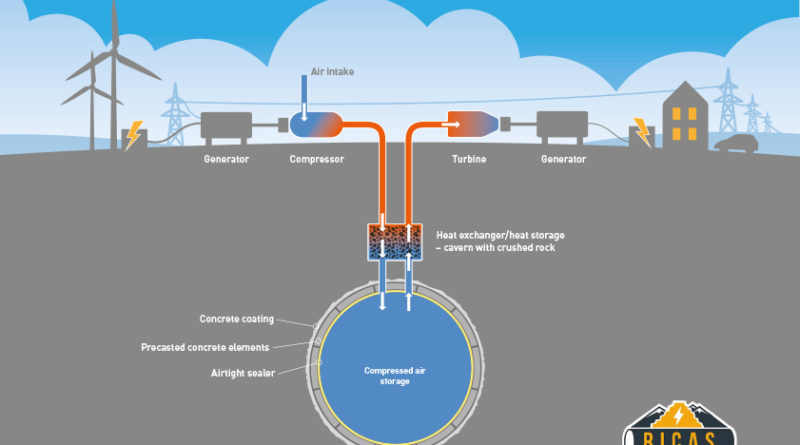 The Sustainability division of LEITAT participates in the European RICAS2020 project, analyzing the environmental and social impact of this new energy storage infrastructure. Below an article written by SINTEF, one of the partners of the project that has been published here originally.

Storing compressed air in sealed tunnels and mines could be a way of storing energy in the future. Wind and sun, two unpredictable resources, are becoming ever more important as sources of energy in Europe. This means that we face a growing need for energy storage facilities, because if energy cannot be used immediately when it is generated, it needs to be stored until it is needed.

The least expensive method is to use hydropower reservoirs as â€˜batteriesâ€™: i.e. generate electricity using the stored water, when power is in short supply, and subsequently pump the water back uphill when surplus renewable energy is available. However, this is a practical solution only in mountainous regions and a few other countries.

What if other countries could use air instead of water as a way of storing energy? Under the auspices of the European Union, scientists from all over Europe are attempting to turn this concept into a viable prospect, via a research project (RICAS 2020) of which LEITAT is a member. The project participants have in mind all parts of the world where sealed disused caverns could be used as storage sites.

The general principle, which has already been adopted at a few sites around the world, is essentially a matter of using surplus electric power to compress air, which is then stored in an underground cavern. When power needs to be made available, the air is released through a gas turbine that generates electricity. Existing plants of this type are often used to meet peak demand as a supplement to classical power plants, providing the right amount of electricity needed at different times during the day.

The physics governing storing energy in the form of compressed air is a result of a law of nature familiar to every user of a bicycle pump: the process of compressing air heats it up. Bicycle pumps compress air in order to increase the pressure of the tyres, and in doing so, makes the pump hot.

â€œThe more of the heat of compression that the air has retained when it is released from the store, the more work it can perform as it passes through the gas turbine. And we think that we will be able to conserve more of that heat than current storage technology can, thus increasing the net efficiency of the storage facilities,â€ says Giovanni Perillo, project manager for SINTEFâ€™s contribution to RICAS 2020.

The two largest compressed air stores in the world are in Germany and the USA. They are underground chambers created in salt formations. But these plants lose a large proportion of the potential energy of the compressed air, because they do not incorporate a system to store the heat produced during the air compression stage.

The participants in RICAS 2020 have a recipe for reducing these losses in future underground storage caverns. At the core of the recipe is an extra station that they have incorporated in their solution.

SINTEFâ€™s project manager explains that it is estimated that this technology could raise the efficiency of the system to as much as 70-80%. The corresponding figures for most of the existing storage sites are no better than 45 to 55 per cent, which means that the produced energy is only half of what was initially used to compress the air into the cavern.

â€œThe project is based on the belief that our solution will offer better energy storage than batteries can ever provide, thanks to its longer lifetime and lower capital cost per kWh of stored energy. We also expect that it can be employed virtually irrespective of the type of geological formation available,â€ says Perillo.

Disused caverns would be just the thing

According to Perillo, there is only a single requirement as regards the choice of site. Large hollow spaces must already exist, as it would be too expensive to excavate new caverns and make them safe.

The participants in the project are therefore envisaging that existing disused underground spaces could be reopened to house the compressed air.

â€œWe regard disused tunnels and mineshafts as potential storage sites, and Norway has those in plenty,â€ says Perillo.

Membrane to seal the cavern walls

The SINTEF researcher is himself a materials scientist. In this EU project he is responsible for SINTEFâ€™s research and development efforts regarding the sealing membrane that will be needed to keep the compressed-air storage sites â€“ literally â€“ airtight.

SINTEF scientists are also contributing their expertise in underground technology, with calculations that will ensure that their solutions, including the sealant materials, will be capable of withstanding the pressure they will be exposed to.

The project will lead to a set of technical specifications and detailed cost analyses. Whether or not a pilot plant is set up will depend on the results of these studies.

â€œIf it turns out that our solution functions well, exciting new possibilities will emerge, not only for energy storage itself, but also for industrial applications of compressed air,â€ says Perillo.

In the midst of the Alpine landscape of southern Germany, Dr. Matthias Finkenrath, Professor of Energy Engineering at Kempten University of Applied Science in Bavaria, has been researching the use of compressed air for energy storage for many years.

He explains that poor energy efficiency has reduced interest in the few plants that are already in operation, and that in the course of the past 15 years, a great deal of money has been invested in developing more energy-efficient versions of the compressed-air energy storage concept.

However, according to the professor, the combination of major technological challenges, low energy prices and uncertainties in the energy market has acted as a â€œshowstopperâ€, which has led to all plans for large-scale demonstration plants being postponed or abandoned. Nothing would therefore please the professor more than seeing the EU project meet its goals.

Believes hot energy storage could lead to a breakthrough

â€œCompressed air stores of the sort that this project is aiming for, could provide significantly lower costs and greatly improve storage capacity compared to for example batteries. If this project leads to storage plants being established under a wide range of geological conditions, that in itself would be an important step forward.

â€œIf the project partners are also successful with their plans for efficient heat storage, the use of compressed air for energy storage could be on the edge of a breakthrough,â€ says Professor Finkenrath.