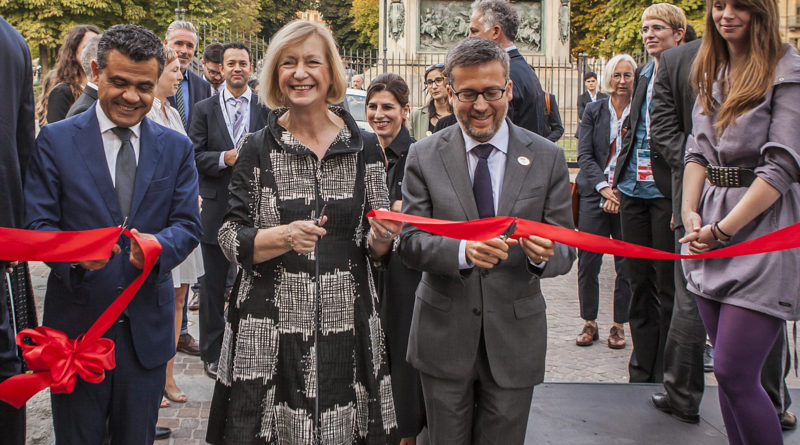 The Ocean Plastics Lab opened its doors to the public for the first time in Turin, Italy! The exhibition was inaugurated on the 27th of September by Johanna Wanka (German Federal Minister of Education and Research), Carlos Moedas (EU Commissioner for Research, Science and Innovation), and Mauro Laus (President of the Regional Council of Piedmont).

The Lab showcases the contribution of science to understand and combat the problem of plastics in the ocean in what the organisers believe to be an exciting, informative and attractive fashion. The exhibition spans four shipping containers containing exhibits and contributions from over 50 partners from 5 continents.

Interested citizens could visit the Ocean Plastics Lab on Piazza Solferino in the center of Turin daily from 27 September to 7 October admission free. Overall we had about 5700 Visitors and and almost 2000 of them were school students age 8-18. Also the media was very interested and the exhibition was presented in four TV interviews as well as several articles in print and online newspapers.

Further stops on the exhibitionâ€™s tour after Turin include Paris from 4-17 November 2017. For 2018 and beyond, the exhibition is planning further stops in Brussels, Washington D.C., Berlin and hopefully many other destinations. The exhibition invites you to follow the Ocean Plastics Lab and its tour on the web (www.oceanplasticslab.net), Twitter @OPlasticsLab, Facebook and Instagram.

LEITAT is participating in the exhibition by providing information and materials related to the MERMAIDS and COMMON SENSE projects.

More news items will be published at each new exhibition stop.